Criss-crossing the airwaves, radio frequencies (RF) have woven a tangled web of confusion that has the world´s leading scientific authorities at loggerheads. We are none the wiser.
Earlier last month, civic authorities sealed a mobile tower atop a school building in the town of Aurangabad in the state of Maharashtra after residents registered as many as six complaints, citing radiation concerns.
In India´s most popular tourist destination Goa, local residents continue to oppose new mobile towers in Mormugao at all gram sabhas (local self-government) of the six village councils in the district and at the meetings of the Mormugao Municipal Council. Not only have they refused permissions but they have grilled their village councils over the issue and asked it to refuse such proposals in the future. They have also passed a resolution to deny permission to towers and resolved to ask the Goa Sate Pollution Control Board to conduct a study on the radiation level of the existing towers near the village.

Is it basically a technology investment that cellular operators need to make if they have to reduce the radiation levels from base stations? (Because it is then a simple explanation as to why they aren´t doing it)!

Base stations are engineered to provide radio frequency (RF) signals to a given area called a ¨cell¨ (this is why they are sometimes called cell phones). The strength of the signal is just sufficient to allow the mobile phone user to make a good quality call. If the RF level of the base station is lowered, then the calls will either be low quality or voids will occur in the area covered so no call can be made. Obviously everyone wants to make good calls, but you need sufficient RF signal to do this.

In India, you also find tower clusters. Some traffic police have complained of being unable to continue working beyond a week at a stretch, at one such location in Mumbai.
Clusters of base station occur because different operators want to use the same location. Being near a high traffic area appeals to operators since their base stations will be used more. In this case however, the regulator must ensure that the RF signals from the cluster of base stations still complies with the Indian standard. There is no health reason why police could not work in areas where there are many base stations.

ICNIRP guidelines set exposure norms for high-intensity, short-term, tissue-heating thresholds and do not protect us from low-intensity, chronic exposures common today.
The ONLY established effects of exposure to RF are caused by short-term heating of tissue. NO adverse health effects have ever been established from long-term low-level exposures. ICNIRP and WHO have been studying this issue for decades and still no well-conducted scientific study has found any carcinogenic or any other long-term RF exposure effect on human health. If they did, they would have a case to lower the limits significantly. Besides radio and TV signals, at higher strengths and causing higher RF exposures than base stations have been around for many decades with no increase in cancer risk. There are increasing numbers of researchers and academics who are arguably seen as more credible, independent, without any links/and/or not funded by the industry, who advocate far stricter norms. According to the BioInitiative report (BIR), the safe radiation density is 1 mw per msq for outdoor and 0.1 for continuous indoor exposure. The BIR was written by ¨scientific activists¨ who have no credibility as research scientists. This report has been strongly criticised by many government agencies for being selective with their studies and accepting the results of very low quality studies to promote their preconceived agenda. Such a report has no credibility with mainstream science.

While there can be variations in studies done by different groups of people, could you provide say why there is such a difference of opinion on what is essentially a technical, empirical issue, and not a subjective one?
Mainstream science requires that studies be conducted to a high quality level. Otherwise, there can be no confidence that the results of low-quality studies are accurate or provide any useful information.

Are the ICNIRP guidelines any indicator of actual safety levels? They have long been criticised as being non-protective and developed by a self-selected group of industry insiders. I believe ICNIRP may be currently revisiting these limits.
ICNIRP guidelines are now used by over 50 countries around the world. The limits ICNIRP promotes are very protective, by at least a minimum of 50 times below any RF exposure likely to produce an adverse health effect. ICNIRP has no relationship with industry, and it is forbidden for any ICNIRP member to have been a member of any industry group, or to receive any funding from industry. ICNIRP is funded only by government agencies and international organisations such as WHO, and is an entirely independent scientific commission. You should get the facts about ICNIRP from its website at: www.ICNIRP.org Yes, ICNIRP is currently revising its RF guidelines and they should be ready for public comment later this year.

The WHO´s International Agency for Research on Cancer (IARC) classified Radiofrequency radiation as a Group 2B ¨Possible Carcinogen¨ in 2011. However, WHO continues to ignore its own agency´s recommendations and favours recommendations made by ICNIRP. Why is this so?
IARC did classify RF as possibly carcinogenic. However, this has been widely misinterpreted as meaning that RF exposure could cause cancer. This is not true. In fact, the 2B classification merely means that there are a couple of studies suggesting RF may cause cancer, but the vast majority of studies do NOT show RF causes cancer. As a result, WHO issued a fact sheet following the IARC classification clarifying the IARC statement by noting that RF has NOT been shown to cause cancer.
1 komentar: 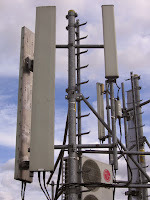